Originally, I had intended for this month’s column to explore the reason so many organizations’ employee training programs fail to produce the desired results and whether there is a difference between “training” and “staff development.”

After a conversation with Williamson County Juvenile Probation Department Executive Director Scott Matthew about some of the innovative things going on in his department, I decided to reschedule the focus on training and staff development to a later issue and allow Williamson County Juvenile Services’ Chaplain and Director of Prevention Services Kory Capps to serve as guest columnist for the September issue.

Prevention in the juvenile justice context traditionally refers to “intervening in young people’s lives before they engage in delinquency in the first place—that is, preventing the first delinquent act.” From another angle, prevention aims to empower youth at critical points in their lives to make positive choices that will steer them away from the juvenile justice system. Prevention efforts are deemed successful when formal contact with the youth justice system is avoided.

Affirming this dimension of success with at-risk youth, Williamson County Juvenile Services is equally committed to the transformative potential inherent in prevention engagement. We strive to construct opportunities for positive change that will encourage healthy youth development, which in turn positions young people to grow into responsible contributors of society.

According to Siegel and Welsh’s book titled Juvenile Delinquency: Theory Practice and Law, “primary prevention focuses on the general well-being of individuals through such measures as access to health care services and general prevention education, and modifying conditions in the physical environment that are conducive to delinquency.”  In contrast, “secondary prevention focuses on intervening with children and young people who are potentially at risk for becoming offenders, as well as the provision of neighborhood programs to deter known delinquency activity.”

The risk of potential delinquent conduct drives both primary and secondary forms of prevention. The key distinction seems to be the timing of the intervention. Primary prevention identifies early risk factors and works to build correlating protective factors. Primary prevention intervenes before questionable conduct occurs. 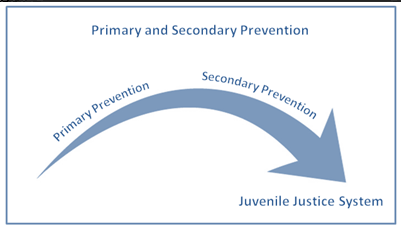 Truancy diversion is one example of secondary prevention. The Office of Juvenile Justice Delinquency and Prevention (OJJDP) asserts that “truancy has been clearly identified as one of the early warning signs that youths potentially are headed for delinquent activity, social isolation, or educational failure.”  Truancy is a predictor, but also a symptom. OJJDP identifies the symptoms of chronic truancy “to be holistic in nature and include family, school, economic, and student variables.” 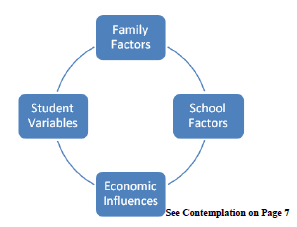 The Neighborhood Conference Committee (NCC) is a county-wide, community based collaborative truancy diversion program, whose partners include 8 school districts, the Justice of the Peace Courts, Williamson County Juvenile Services, United Way of Williamson County, Bluebonnet Trails Community Services and community volunteers. The mission of NCC is to divert youth from the juvenile justice system through a multi-tiered collaborative effort by referring youth and their families to both school and community based services.

The school district refers students to the NCC program once a student has accumulated several days of unexcused absences. When the student and family attend the initial NCC Intake session, they meet with community volunteers to discuss the underlying issues driving the truancy and develop a strategic plan to affect change and increase student success. The student is required to follow-up with an assigned Case Manager once a week for a 6 week period. The Case Manager reviews the student’s grades, attendance and discipline reports from the school, as well as helps to align community and school based solution focused support services.

In a recent Texas Appleseed publication Williamson County’s NCC was identified as an effective truancy diversion program. The report applauds NCC and programs like it that “identify the reasons students are absent and connect the students with school and community-based resources that can improve their attendance.”The success of the NCC collaboration has been measured in several ways over the last few years.

8 Texas Appleseed, Class, Not Court: Reconsidering Texas’ Criminalization of Truancy (Texas Appleseed: Austin, 2015), 17-19.The report identified five characteristics for promising and effective truancy diversion programs. These characteristics were 1) active collaboration among involved parties, 2) student and family involvement, 3) a comprehensive approach that understands the complexity of truancy, 3) meaningful incentives and sanctions, 4) a supportive program environment, and 5) rigorous evaluation and assessment of the program.