Don’t Ignore the Elephant in the Room

One of the things which I have learned over my years as an organizational consultant attempting to equip individuals and organizations to accomplish their visions, missions, and goals, is that every organization has what is commonly referred to as “an elephant in the room.”

What is an Elephant in the Room?

Exactly what is meant by the term, “elephant in the room”? According, to Wikipedia.com, “the term refers to a question, problem, solution, or controversial issue that is obvious, but which is 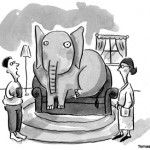 ignored by a group of people, generally because it causes embarrassment or is taboo. The idiom can imply a value judgment that the issue ought to be discussed openly, or it can simply be an acknowledgment that the issue is there and not going to go away by itself.” For the sake of our discussion, let’s break down the specifics as to what that means. The word “elephant” suggests that the issue or problem is so big and so heavy that no one wants to confront it or try to move it. By virtue of its size, it takes up space, energy, time and productivity. The phrase “in the room” suggests that the issue is so large that no one can help but notice it. Since it is in the middle of the room, it means that people have purposely avoided it, walked around it, and pretended it is not there rather than deal with it.

Truths about the Elephants in the Room

In addition to learning that every organization has them, some other truths which I have learned about elephants in the room are that:

How to Deal with the Elephant in the Room

Regardless of how difficult and uncomfortable it may be, the situation must be addressed. If it is not addressed four things will happen:

There are times when the elephant is present in a group situation and, at other times, it might be with an individual person. Each of these requires a different approach.

If the elephant is (or with) an individual, it is usually better do deal with it personally in a one-to-one meeting behind closed doors and away from inquisitive ears! The steps to use in this instance will be discussed in next month’s column.

When working with a group, if the elephant affects the whole group, it is better to deal with it in a special meeting. The steps in this process are:

As stated earlier, everyone is already aware of the elephant, but instead of addressing the issue, they have walked around it, avoided it, and pretended it is not there.

When a manager acknowledges the elephant, he/she

People’s initial reaction might be hesitancy or worry about discussing the elephant in the room; however, when handled correctly, the end result is that they are pleased it occurred.

In preparing for the meeting to discuss the elephant in the room, the manager needs to

During the meeting to address the elephant in the room, the manager needs to ensure that the group understands that he/she is providing only his/her viewpoint. There is no way the manager can know what others are thinking.

Get Ideas from Team Members.

Even though the manager has come to the meeting prepared with a range of alternatives to resolve the problem, once the elephant has been acknowledged and identified, the manager should solicit ideas from team members about how to resolve the issue. If the manager presents his/her potential solutions first, team members may be reluctant to present their ideas and valuable input into the process may be lost.

Get Agreement on the Best Solution

Get the group to agree not only on what is the best solution, but who is going to do what and when they are going to do it. Get agreement from the members of the group that they will support the plan and that they are committed to taking the actions necessary to rid the organization of the elephant.

Express Appreciation to the Group.

Thank everyone for their willingness to deal with the “Elephant” and let them know that it is important that “Elephants” are dealt with as soon as they arrive. If the team knows that the manager won´t shoot the messenger, they will be more willing to speak up.

Next month’s column will discuss how to deal with the elephant if it really only involves one person and also how you can deal with that elephant if you are not in a management position.